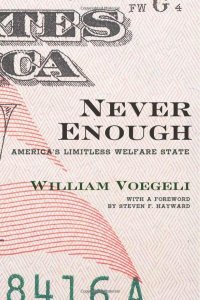 Since the beginning of the New Deal American liberals have insisted that the government must do more – much more- to help the poor, to increase economic security, to promote social justice and solidarity, to reduce inequality and mitigate the harshness of capitalism. Nonetheless, liberals have never answered, or even acknowledged, the corresponding question: what would be the size and nature of a welfare state that was not contemptibly austere, that did not urgently need new programs, bigger budgets, and a broader mandate? Even though the federal government’s outlays on all the programs in its “Human Resources” category were, after adjusting for inflation and population growth, 15 times larger in 2007 than in 1940, liberal rhetoric is always addressed to a nation trapped in “Groundhog Day,” where every year is 1932, and where none of the existing welfare state program that spends tens of billions of dollar matter or even exist.

Never Enough explores the roots and consequences of liberals’ aphasia about the welfare state’s ultimate size, scope and cost, assessing what liberalism’s lack of a limiting principle means for the policy choices confronting America in a new century. It concludes that the liberal project has jeopardized our experiment in self-government by encouraging Americans to regard their republic as a vehicle for taking advantage of their fellow citizens, rather than as a compact for respecting one another’s rights and safeguarding future generations’ opportunities.

What people are saying

“William Voegeli may be the most valuable, engaging and original critic of liberalism writing today. No serious student of contemporary political life will regret their investment in this profound yet eminently accessible work. Never Enough answers questions most people struggle even to articulate.” Jonah Goldberg, author of Liberal Fascism

“Far and away the most substantial explanation to date of our current political condition….  the best book written on liberalism in recent decades.” Fred Siegel, Claremont Review of Books